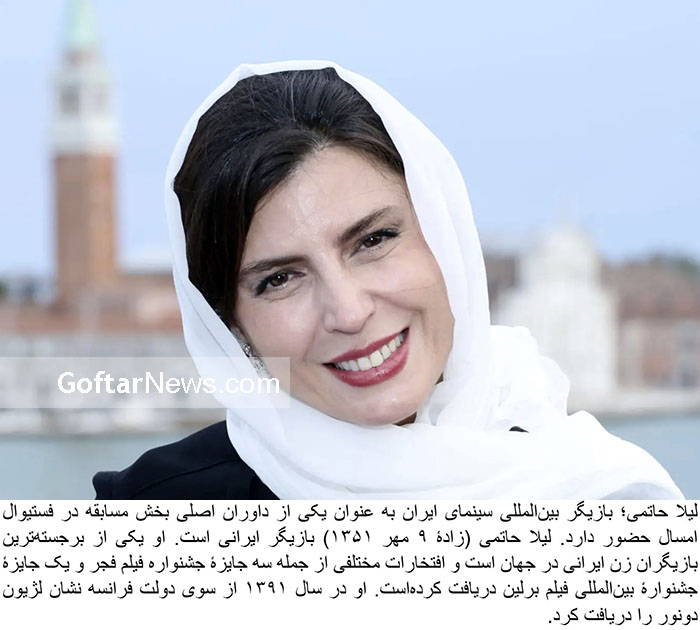 Leila Hatami attends the “Cinema Danieli – An Unforgettable Story” inaugural cocktail with Variety ahead of the 79th Venice International Film Festival. Leila Hatami (born 1 October 1972) is an actress. One of the preeminent actresses, she has received numerous accolades, including three Crystal Simorgh and the Berlin International Film Festival Silver Bear for Best Actress. The Government of France has awarded her the Legion of Honour in 2012. Hatami played several small roles in her father’s productions throughout her youth, including in the Hezar Dastan television series and the Kamalolmolk movie. Her first leading film appearance was the title role in the 1997 film Leila, directed by Dariush Mehrjui. She received the Diploma of Honor for Best Actress from the 15th Fajr Film Festival. Following this, she continued to act regularly in cinema.

While the hijab monitoring machine and suppression of women’s clothing have returned to the streets after a few months, the … END_OF_DOCUMENT_TOKEN_TO_BE_REPLACED

Cardboard imam refers to the set of cardboard replicas made of Seyyed Ruhollah Khomeini, which were first used in the … END_OF_DOCUMENT_TOKEN_TO_BE_REPLACED

After the departure of the Dutch striker Jurgen Lokadia from the Persepolis team, the directors of this club thought of … END_OF_DOCUMENT_TOKEN_TO_BE_REPLACED

On this special cover, apart from Golshifteh Farahani and Zaramira Brahimi, ten other famous faces have supported  protesting women, and … END_OF_DOCUMENT_TOKEN_TO_BE_REPLACED