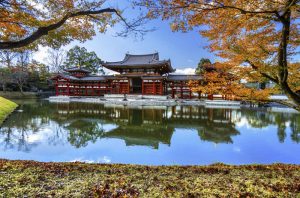 The Japanese language orders words differently than we do in English. Instead of ordering sentences by subject-verb-object (example: I write words), Japanese uses subject-object-verb (example: I words write). Over a thousand tame sika deer roam the streets of Nara, Japan. Once considered heavenly creatures, the deer are now classified as a national treasure (though some are being culled for destroying plant life), and can be seen bowing to tourists in exchange for crackers that are sold on site. From the 12th century to the demise of feudalism in the 19th century, the samurai were a powerful warrior class in Japan.

A samurai essentially had a license to kill, with the authority to strike down any commoner who compromised their honor. Ritual suicide (known as seppuku) was a respected practice for a samurai who brought dishonor to his lord. The bow is an important form of greeting in Japan, and Japanese people work hard to perfect it. The depth of the bow is significant—lower bows indicate more respect. The kimono is a traditional Japanese garment worn by both men and women. It consists of a long robe-like dress that is wrapped around the body, with the left side always covering the right. The obi is the belt that keeps the kimono secure.

A single kimono can cost over $10,000. Geisha, known for their elaborate hairstyles and white makeup, have been entertaining in Japan since the 18th century. The white powder covers most of the geisha’s face and neck, though unpainted spaces creating a W shape is usually left on the neck, which is considered alluring. Traditional Japanese rooms are tiled with Tatami, or mats made with rice straw. A mat’s length is always twice its width, and its size is standardized depending on the region. For that reason, room size is often indicated by the number of mats needed to cover the space. Japan is home to the Japanese macaque, or snow monkey, which lives in colder climates than other primates.

The Nagano Prefecture is known for its macaques, who bathe in hot springs in the winter. The world’s largest seafood market is the Tsukiji fish market in Tokyo. The market employs over 60,000 people and opens at 3:00 am most mornings, with its famous wholesale tuna auctions beginning at five. Japan will be hosting its second summer Olympics, and its fourth overall, in Tokyo in 2020. The motto for the Games is “Discover Tokyo,” and the mascot—chosen by Japanese schoolchildren—is a blue and white superhero who has the power to teleport. Japan is famous for its immaculate gardens, which are meticulously planned and maintained and are considered a high art. “Borrowed scenery” is an important element in garden design; it means the garden’s landscape includes elements from outside its boundaries, such as mountains, to form a backdrop.

After the departure of the Dutch striker Jurgen Lokadia from the Persepolis team, the directors of this club thought of … END_OF_DOCUMENT_TOKEN_TO_BE_REPLACED

On this special cover, apart from Golshifteh Farahani and Zaramira Brahimi, ten other famous faces have supported  protesting women, and … END_OF_DOCUMENT_TOKEN_TO_BE_REPLACED

Rafaela Santos is the sister of one of the most prominent and famous footballers in the world, but apart from … END_OF_DOCUMENT_TOKEN_TO_BE_REPLACED

Anashid Hosseini was born on January 24, 1992 in Ahvaz. His family moved very soon, a year after his birth. … END_OF_DOCUMENT_TOKEN_TO_BE_REPLACED

Neda Agha-Soltan (23 January 1983 – 20 June 2009) was an Iranian student of philosophy, who was participating in the … END_OF_DOCUMENT_TOKEN_TO_BE_REPLACED