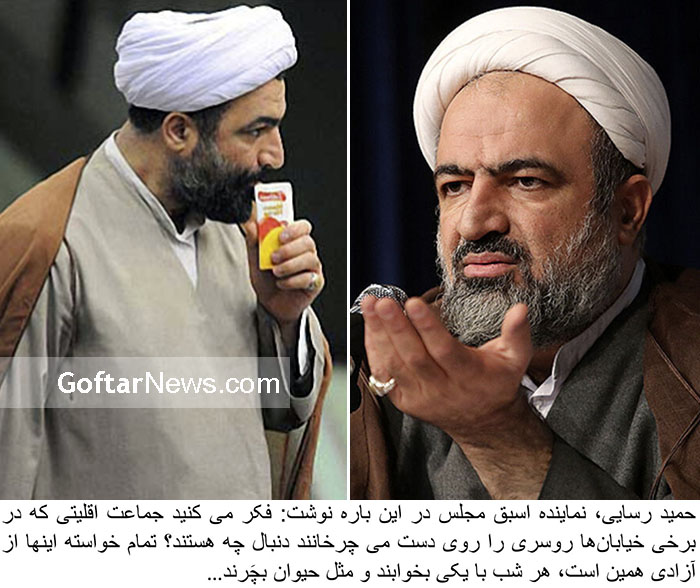 A video of the protests after Mehsa Amini’s death abroad is circulating among cyberspace users, where the female speaker of the ceremony is not wearing clothes while speaking. Hamid Rasaei, a former member of parliament, wrote about this on his Telegram channel: What do you think the minority groups who wear scarves on their hands in some areas are looking for? Many of them don’t even know, but on the other side of the water, in one of the gatherings, the reality of this flow has shown itself. One is naked and gives a speech. The whole point is why they don’t let us walk around naked. All they want out of life is to sleep with someone every night and graze like animals… Poorer than this group are those who, like soldiers without rations and duty, post stories and likes in the virtual space and give a coefficient to this black future, while they may not believe in this future.

Mahlagha Jaberi attends the Opening Night Gala screening of “What’s Love Got To Do With It?” at the Red Sea … END_OF_DOCUMENT_TOKEN_TO_BE_REPLACED

Shiva Balochi, the actress in the series Nurses, wrote: As the smallest member of the Muslim community, the hijab has … END_OF_DOCUMENT_TOKEN_TO_BE_REPLACED

Shohreh Mousavi, one of the directors of the Badran Company, who defrauded over 9,000 billion tomans from 300,000 people by … END_OF_DOCUMENT_TOKEN_TO_BE_REPLACED

“Evil and passion work with him.” Open the heart valves. “Its night song can be heard all over the world.” … END_OF_DOCUMENT_TOKEN_TO_BE_REPLACED