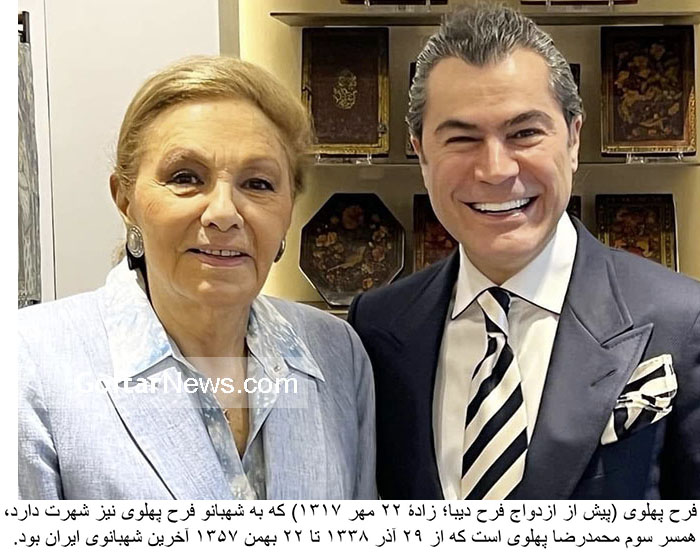 Farah Pahlavi (born 14 October 1938) is the widow of the last Shah, Mohammad Reza Pahlavi, and was successively Queen and Shahbanu (empress consort)  from 1959 to 1979. She was born into a prosperous family whose fortunes were diminished after her father’s early death. While studying architecture in Paris, France, she was introduced to the Shah at the embassy, and they were married in December 1959. The Shah’s first two marriages had not produced a son—necessary for royal succession—resulting in great rejoicing at the birth of Crown Prince Reza in October of the following year. Diba was then free to pursue interests other than domestic duties, though she was not allowed a political role. She worked for many charities, and founded first American-style university, enabling more women to become students in the country. She also facilitated the buying-back of Iranian antiquities from museums abroad.

While the hijab monitoring machine and suppression of women’s clothing have returned to the streets after a few months, the … END_OF_DOCUMENT_TOKEN_TO_BE_REPLACED

Cardboard imam refers to the set of cardboard replicas made of Seyyed Ruhollah Khomeini, which were first used in the … END_OF_DOCUMENT_TOKEN_TO_BE_REPLACED

After the departure of the Dutch striker Jurgen Lokadia from the Persepolis team, the directors of this club thought of … END_OF_DOCUMENT_TOKEN_TO_BE_REPLACED

On this special cover, apart from Golshifteh Farahani and Zaramira Brahimi, ten other famous faces have supported  protesting women, and … END_OF_DOCUMENT_TOKEN_TO_BE_REPLACED