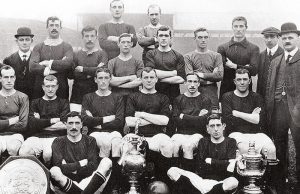 In 1910 the club moved from its old Bank Street ground into Old Trafford stadium, which has served as the team’s home ever since. Manchester United’s history since World War II has been dominated by two long-serving managers. Sir Matthew Busby was appointed manager in 1945 and over the next 24 years steered the club to five English league and two FA Cup victories. The club had to contend with tragedy in 1958 when an aircraft carrying the team crashed in Munich, killing 23 of the 44 onboard. In the 1960s the team, rebuilt by Busby, included the highly talented attacking trio of Bobby Charlton, George Best, and Denis Law. In 1968 this team became the first English club to win the European Cup (now known as the Champions League) with a 4–1 victory over Benfica of Portugal in the final. The former coach of the Scottish team Aberdeen, Alex Ferguson, managed the club from 1986 to 2013 and presided over an unparalleled spell of dominance in the English league.

Manchester United has won 12 Premier League titles since that league’s inaugural season in 1992–93. In the 1998–99 season the club secured the first “treble” in English football history by winning the Premier League, the FA Cup, and the Champions League. A second Champions League victory came in the 2007–08 season. Manchester United is renowned for its youth team program, which has generated many notable homegrown players who later performed for the club’s first team, including David Beckham. The club has also brought in a number of major transfer signings over the years, such as Wayne Rooney, Rio Ferdinand, Andy Cole, Roy Keane, Eric Cantona, Patrice Evra, Dimitar Berbatov, and Cristiano Ronaldo.

While the hijab monitoring machine and suppression of women’s clothing have returned to the streets after a few months, the … END_OF_DOCUMENT_TOKEN_TO_BE_REPLACED

Cardboard imam refers to the set of cardboard replicas made of Seyyed Ruhollah Khomeini, which were first used in the … END_OF_DOCUMENT_TOKEN_TO_BE_REPLACED

After the departure of the Dutch striker Jurgen Lokadia from the Persepolis team, the directors of this club thought of … END_OF_DOCUMENT_TOKEN_TO_BE_REPLACED

On this special cover, apart from Golshifteh Farahani and Zaramira Brahimi, ten other famous faces have supported  protesting women, and … END_OF_DOCUMENT_TOKEN_TO_BE_REPLACED