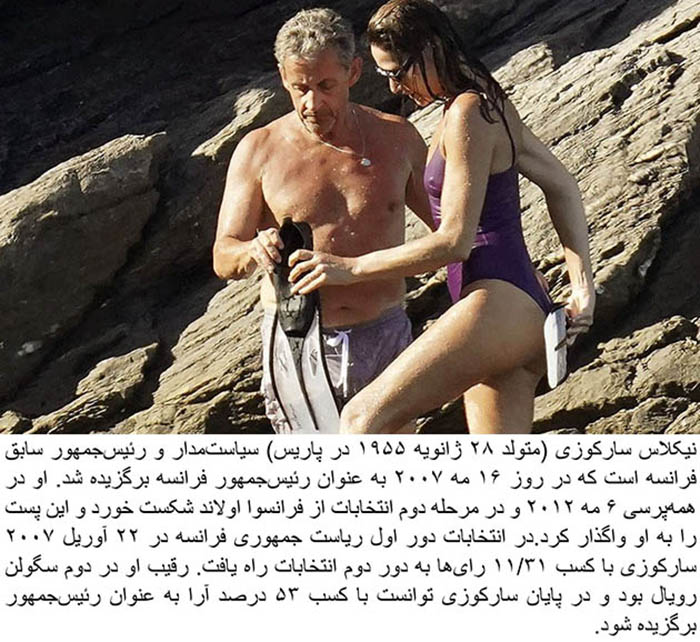 Former French President Nicolas Sarkozy appears to have put his worries behind him as he joined his wife and sister-in-law to relax in the sea in the French Riviera. The politician, 66, is currently awaiting a verdict after a month-long corruption trial concluded in June, during which the court sought to determine whether he broke laws on campaign financing in his unsuccessful 2012 re-election bid. If found guilty, he could face up to six months in jail and a fine of 3,750 euros.

Yasmine Pahlavi is the wife of Reza Pahlavi, the last crown prince of the former Imperial State. She worked for … END_OF_DOCUMENT_TOKEN_TO_BE_REPLACED

Ali Daei started his football career with Esteghlal Ardabil. He joined the Tehran taxi team after being admitted to Sharif … END_OF_DOCUMENT_TOKEN_TO_BE_REPLACED

In recent days, it has been observed that the government has used teenagers and students in military uniforms and equipment … END_OF_DOCUMENT_TOKEN_TO_BE_REPLACED

Mohammad Reza Golzar was born on April 1, 1356. He is an actor, singer, and composer. He graduated from Azad … END_OF_DOCUMENT_TOKEN_TO_BE_REPLACED