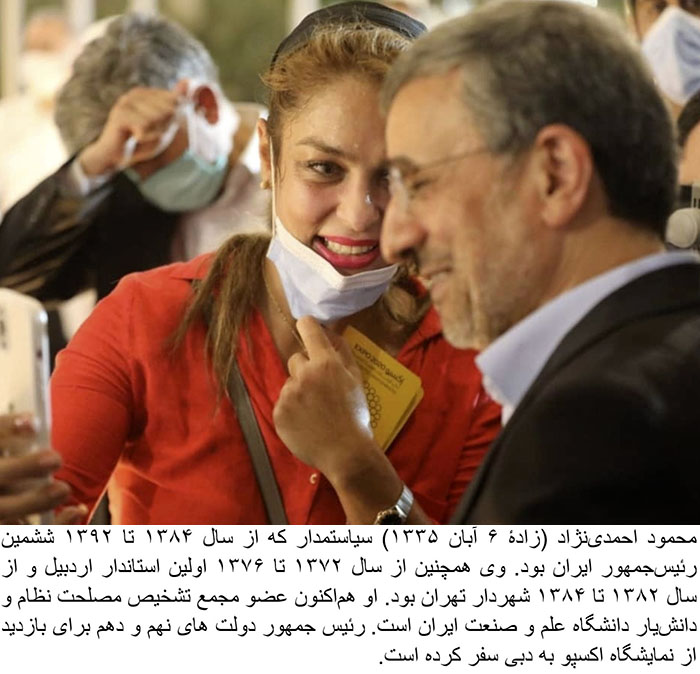 Former president Mahmoud Ahmadinejad is on a rare trip to the United Arab Emirates (UAE), his first foreign visit since 2015. An informed source close to Ahmadinejad has told. media that the conservative politician left Tehran for the UAE at 8AM local time, and that he will attend the Dubai World Expo among other engagements “for at least the next three days”. Mahmoud Ahmadinejad , born Mahmoud Sabbaghian (28 October 1956), is a conservative politician who served as the sixth president from 2005 to 2013. He was known for his hardliner views and nuclearisation. He was also the main political leader of the Alliance of Builders, a coalition of conservative political groups in the country, and served as mayor of Tehran from 2003 to 2005, reversing many of his predecessor’s reforms.

After the departure of the Dutch striker Jurgen Lokadia from the Persepolis team, the directors of this club thought of … END_OF_DOCUMENT_TOKEN_TO_BE_REPLACED

On this special cover, apart from Golshifteh Farahani and Zaramira Brahimi, ten other famous faces have supported  protesting women, and … END_OF_DOCUMENT_TOKEN_TO_BE_REPLACED

Rafaela Santos is the sister of one of the most prominent and famous footballers in the world, but apart from … END_OF_DOCUMENT_TOKEN_TO_BE_REPLACED

Anashid Hosseini was born on January 24, 1992 in Ahvaz. His family moved very soon, a year after his birth. … END_OF_DOCUMENT_TOKEN_TO_BE_REPLACED

Neda Agha-Soltan (23 January 1983 – 20 June 2009) was an Iranian student of philosophy, who was participating in the … END_OF_DOCUMENT_TOKEN_TO_BE_REPLACED