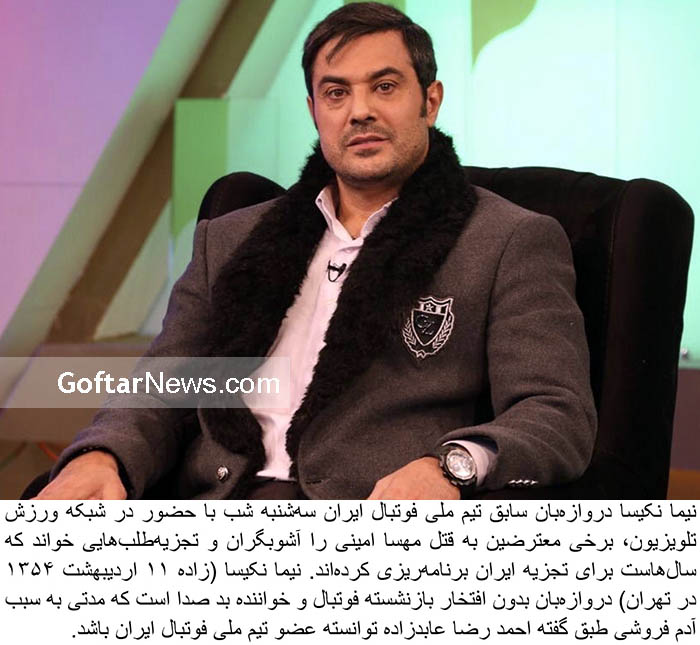 Nakisa first entered the limelight in football when he played for Persepolis FC. Following World Cup 1998, Nakisa was transferred to Albanian Side KS Flamurtari Vlorë, but left very soon after to AO Kavalas. He had a tough time there, and moved back to the season after. He went back to Persepolis but due to his rivalry with Abedzadeh, Nakisa decided to leave the club for Pas . He played there until August 2006, when he quit after having an argument with Pas Tehran officials. There was speculation linking him to Esteghlal Ahvaz, but after the signing of Ebrahim Mirzapour, Nakisa was no longer needed. Due to this he missed the IPL transfer deadline and was forced to sign with a lower league team, on September 4, 2006 it was announced that Nima Nakisa had officially signed a one-year contract with Azadegan League outfit Esteghlal Jonub Dezful.

Mahlagha Jaberi attends the Opening Night Gala screening of “What’s Love Got To Do With It?” at the Red Sea … END_OF_DOCUMENT_TOKEN_TO_BE_REPLACED

Shiva Balochi, the actress in the series Nurses, wrote: As the smallest member of the Muslim community, the hijab has … END_OF_DOCUMENT_TOKEN_TO_BE_REPLACED

Shohreh Mousavi, one of the directors of the Badran Company, who defrauded over 9,000 billion tomans from 300,000 people by … END_OF_DOCUMENT_TOKEN_TO_BE_REPLACED

“Evil and passion work with him.” Open the heart valves. “Its night song can be heard all over the world.” … END_OF_DOCUMENT_TOKEN_TO_BE_REPLACED