Barbara Walters, a First Among TV Newswoman and Shah interviewer, Is Dead at 93 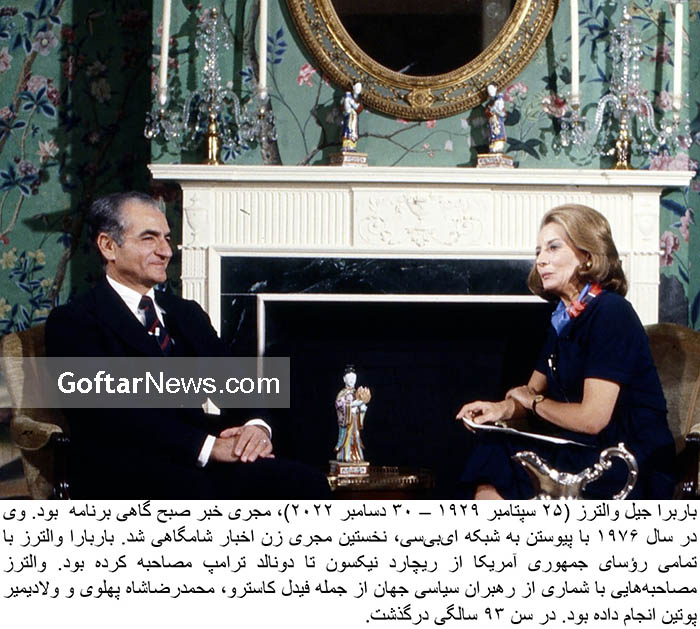 Barbara Jill Walters (September 25, 1929 – December 30, 2022) was an American broadcast journalist and television personality. Known for her interviewing ability and popularity with viewers, Walters appeared as a host of numerous television programs, including Today, The View, 20/20, and the ABC Evening News. Walters was a working journalist from 1951 until her retirement in 2015. Walters began her career on The Today Show in the early 1960s as a writer and segment producer of women’s interest stories. Her popularity with viewers resulted in Walters receiving more airtime, and in 1974, she became co-host of the program, the first woman to hold such a title on an American news program.

After the departure of the Dutch striker Jurgen Lokadia from the Persepolis team, the directors of this club thought of … END_OF_DOCUMENT_TOKEN_TO_BE_REPLACED

On this special cover, apart from Golshifteh Farahani and Zaramira Brahimi, ten other famous faces have supported  protesting women, and … END_OF_DOCUMENT_TOKEN_TO_BE_REPLACED

Rafaela Santos is the sister of one of the most prominent and famous footballers in the world, but apart from … END_OF_DOCUMENT_TOKEN_TO_BE_REPLACED

Anashid Hosseini was born on January 24, 1992 in Ahvaz. His family moved very soon, a year after his birth. … END_OF_DOCUMENT_TOKEN_TO_BE_REPLACED

Neda Agha-Soltan (23 January 1983 – 20 June 2009) was an Iranian student of philosophy, who was participating in the … END_OF_DOCUMENT_TOKEN_TO_BE_REPLACED