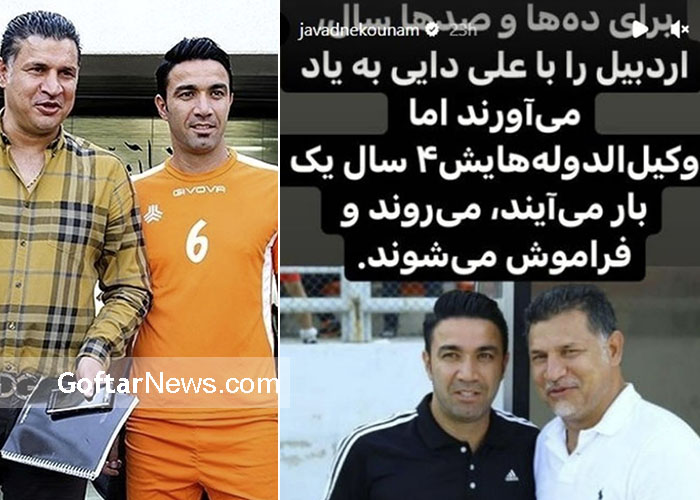 Javad Nekounam (born September 7, 1980) is a retired professional footballer who played as a central midfielder and is the current manager of Foolad FC. He spent most of his professional career with Pas and Spain’s Osasuna, appearing in 197 official games and scoring 31 goals over his two spells with the latter club, and also being team captain. He also competed in the United Arab Emirates, Kuwait, and Qatar in 18 seasons as a senior. Nekounam made 148 appearances for the national team, appearing in several major tournaments, including two World Cups and four Asian Cups.

Shiva Balochi, the actress in the series Nurses, wrote: As the smallest member of the Muslim community, the hijab has … END_OF_DOCUMENT_TOKEN_TO_BE_REPLACED

Shohreh Mousavi, one of the directors of the Badran Company, who defrauded over 9,000 billion tomans from 300,000 people by … END_OF_DOCUMENT_TOKEN_TO_BE_REPLACED

“Evil and passion work with him.” Open the heart valves. “Its night song can be heard all over the world.” … END_OF_DOCUMENT_TOKEN_TO_BE_REPLACED

The old actress Shaheen has died.Mahintaj Moghul Kayser, known as Shaheen, a cinematic actor and an old singer, has passed … END_OF_DOCUMENT_TOKEN_TO_BE_REPLACED