Artists who live like hyenas in the blood of zealous youth 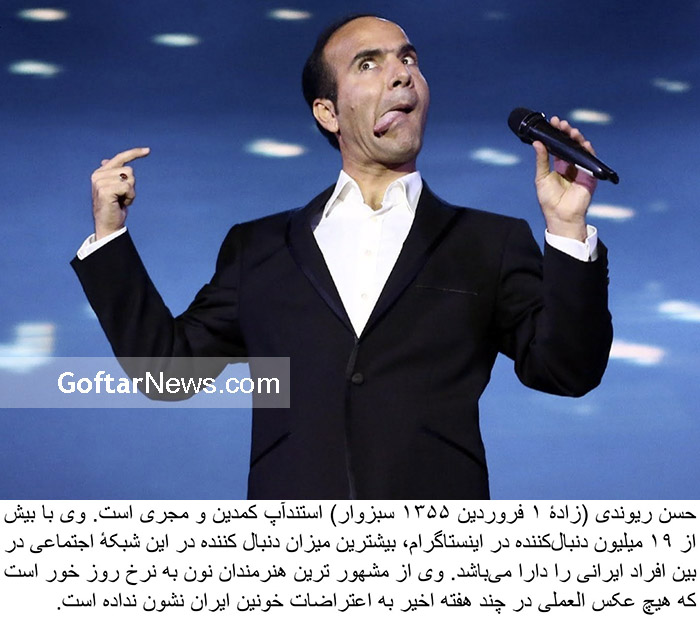 Hassan Rivandi (born on April 1, 1455 in Sabzevar) is a stand-up comedian and presenter. With more than 19 million followers on Instagram, he has the highest number of followers on this social network among them. Hassan Rivandi was born on April 1, 1965 in Sabzevar. He is a graduate of physical education from Hakim Sabzevari University. His main job is as a secretary. After serving in the military, Rivandi continued his career as a sound engineer and performer. He learned self-style under the supervision of Mohammad Nouri. His first performance on stage, at the age of 15, was performed in Shahid Muftah Sabzevar Hall in a celebration program on the occasion of Fajr decade, with the presence of local people and artists. He started his career by imitating the voices of cartoon characters and then started imitating the voices of traditional Iranian singers, including Shahram Nazeri, and pop singers such as Nasser Abdullahi and Alireza Assar. Rivandi performed Iran’s first Khandeh concert on July 25, 1392, in Milad Tower, Tehran. In these concerts, he performs social jokes, imitating the voices of singers and actors, as well as entertaining jokes.

Mahlagha Jaberi attends the Opening Night Gala screening of “What’s Love Got To Do With It?” at the Red Sea … END_OF_DOCUMENT_TOKEN_TO_BE_REPLACED

Shiva Balochi, the actress in the series Nurses, wrote: As the smallest member of the Muslim community, the hijab has … END_OF_DOCUMENT_TOKEN_TO_BE_REPLACED

Shohreh Mousavi, one of the directors of the Badran Company, who defrauded over 9,000 billion tomans from 300,000 people by … END_OF_DOCUMENT_TOKEN_TO_BE_REPLACED

“Evil and passion work with him.” Open the heart valves. “Its night song can be heard all over the world.” … END_OF_DOCUMENT_TOKEN_TO_BE_REPLACED