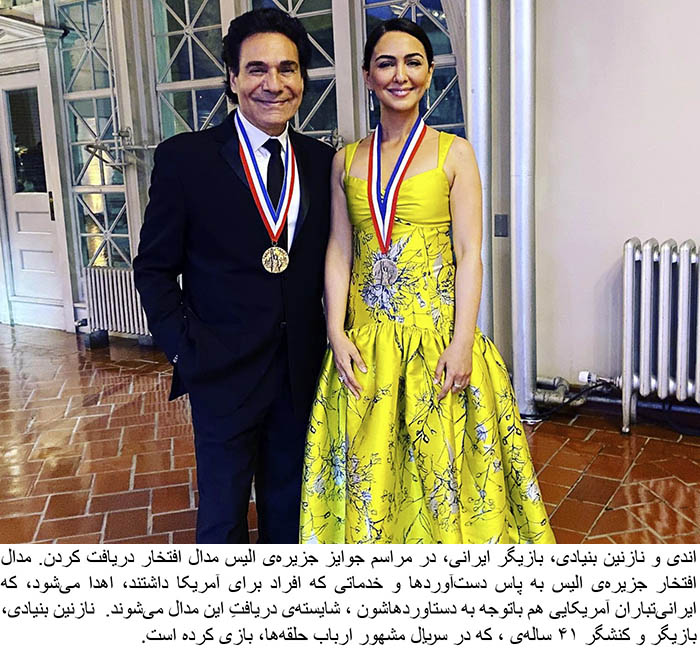 Shani Rigsbee (born May 1, 1967, Hot Springs, Arkansas) is a singer-songwriter, producer, and actress who is known for her support for humanitarian causes. In 2007, she released At The Casbah, a film based on the One Thousand and One Nights collection of stories. Rigsbee and the Iranian pop star Andy Madadian toured internationally for many years, and they have performed benefits for various charitable organizations. They sang for the Dalai Lama in 2014. Rigsbee and Madadian were married in 2011. She was born in Arkansas and lives in Los Angeles. Andranik Madadian (born April 22, 1955), better known by his stage name, Andy is a singer-songwriter and actor. He is a naturalized American and currently lives in Los Angeles. Madadian was awarded the 2684th star on the Hollywood Walk of Fame, becoming the first Iranian to receive the honor. His star is located at Highland Avenue at 6810 Hollywood Boulevard in Los Angeles.

Mahlagha Jaberi attends the Opening Night Gala screening of “What’s Love Got To Do With It?” at the Red Sea … END_OF_DOCUMENT_TOKEN_TO_BE_REPLACED

Shiva Balochi, the actress in the series Nurses, wrote: As the smallest member of the Muslim community, the hijab has … END_OF_DOCUMENT_TOKEN_TO_BE_REPLACED

Shohreh Mousavi, one of the directors of the Badran Company, who defrauded over 9,000 billion tomans from 300,000 people by … END_OF_DOCUMENT_TOKEN_TO_BE_REPLACED

“Evil and passion work with him.” Open the heart valves. “Its night song can be heard all over the world.” … END_OF_DOCUMENT_TOKEN_TO_BE_REPLACED