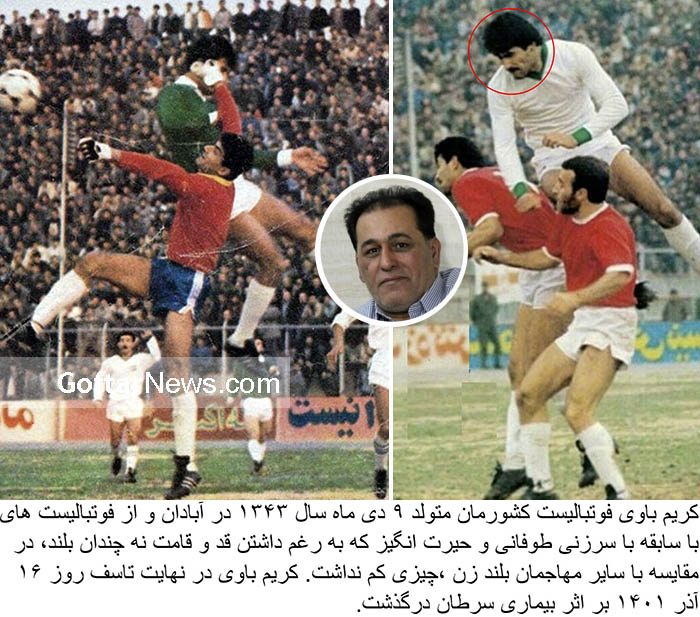 Karim Bavi, a football player from our country, was born in Abadan on January 9, 1343, and is one of the most famous football players with a stormy and amazing attack, despite not being as tall as other tall female strikers.Unfortunately, Karim Bavi died on December 16, 1401, due to cancer. Karim Bavi was an footballer who played as a striker. He was one of the most influential strikers of the national team despite his short playing career. Bavi debuted for on 28 May 1986 against China. He scored 10 goals in 23 official games for his country. Karim Bavi recently underwent a difficult surgery, and due to the same problems he had due to the presence of cracks in his body, he had to undergo surgery and empty his bladder. He played the last game of his football career for a team called Sorkheh Hesar and retired from football in 1374. The occasional attempts to become a coach or return to the limelight were not so fruitful, and after his football career, he was exiled to the forgotten homeland of football. and had no way out of it.

After the departure of the Dutch striker Jurgen Lokadia from the Persepolis team, the directors of this club thought of … END_OF_DOCUMENT_TOKEN_TO_BE_REPLACED

On this special cover, apart from Golshifteh Farahani and Zaramira Brahimi, ten other famous faces have supported  protesting women, and … END_OF_DOCUMENT_TOKEN_TO_BE_REPLACED

Rafaela Santos is the sister of one of the most prominent and famous footballers in the world, but apart from … END_OF_DOCUMENT_TOKEN_TO_BE_REPLACED

Anashid Hosseini was born on January 24, 1992 in Ahvaz. His family moved very soon, a year after his birth. … END_OF_DOCUMENT_TOKEN_TO_BE_REPLACED

Neda Agha-Soltan (23 January 1983 – 20 June 2009) was an Iranian student of philosophy, who was participating in the … END_OF_DOCUMENT_TOKEN_TO_BE_REPLACED