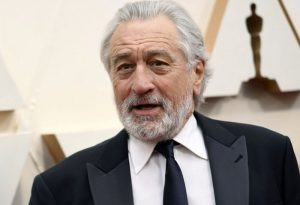 Robert De Niro has returned home to New York after injuring his leg off-set in Oklahoma while filming Martin Scorsese’s “Killers of the Flower Moon,” in which he is starring alongside Leonardo DiCaprio. Variety confirmed that he was injured, but it’s not known how serious it might be. The injury occurred on his own time, not on the set. De Niro’s spokesperson Stan Rosenfield specified that the injury was to his quadriceps muscle.

“While at his on-location home in Oklahoma for the filming of Martin Scorsese’s ‘Killers of the Flower Moon,’ Robert De Niro injured his quadriceps muscle which will be treated medically in New York. This will not affect production as he was not scheduled to film again for another three weeks,” Rosenfield said. Based on David Grann’s bestselling non-fiction book about newly-formed Bureau of Investigation, which tries to solve the serial murder of members of the Osage Nation, the project also stars Jesse Plemons, Tantoo Cardinal, Pat Healy and Lily Gladstone. Tulsa World reported this week that the streets of Fairfax, Okla. had been covered with dirt to give it the look of 1919, while antique cars were brought in and De Niro was photographed sporting a pin-striped suit with a fedora.

“We are thrilled to finally start production on ‘Killers of the Flower Moon’ in Oklahoma,” Scorsese said in a statement when production started last month. “To be able to tell this story on the land where these events took place is incredibly important and critical to allowing us to portray an accurate depiction of the time and people. … We’re excited to start working with our local cast and crew to bring this story to life on screen and immortalize a time in American history that should not be forgotten.” Budgeted at close to $200 million, the large scale production released a first-look photo of DiCaprio and Gladstone on Monday.

After the departure of the Dutch striker Jurgen Lokadia from the Persepolis team, the directors of this club thought of … END_OF_DOCUMENT_TOKEN_TO_BE_REPLACED

On this special cover, apart from Golshifteh Farahani and Zaramira Brahimi, ten other famous faces have supported  protesting women, and … END_OF_DOCUMENT_TOKEN_TO_BE_REPLACED

Rafaela Santos is the sister of one of the most prominent and famous footballers in the world, but apart from … END_OF_DOCUMENT_TOKEN_TO_BE_REPLACED

Anashid Hosseini was born on January 24, 1992 in Ahvaz. His family moved very soon, a year after his birth. … END_OF_DOCUMENT_TOKEN_TO_BE_REPLACED

Neda Agha-Soltan (23 January 1983 – 20 June 2009) was an Iranian student of philosophy, who was participating in the … END_OF_DOCUMENT_TOKEN_TO_BE_REPLACED