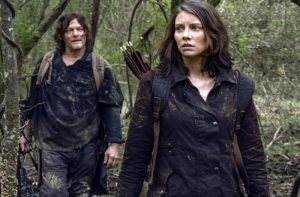 The Walking Dead chief content officer Scott Gimple warns the eleventh and final season, starting August 22 on AMC, gets “really brutal” and “very, very dark.” Season 10 pit our heroes against Alpha (Samantha Morton) and Beta (Ryan Hurst) of the skin-wearing Whisperers, who were silenced once and for all thanks to a team effort led by Daryl (Norman Reedus) and Carol (Melissa McBride), before introducing the Reapers hunting Maggie Rhee (Lauren Cohan) and her dwindling group of survivors.

In the aftermath of the Whisperer War, the Alexandrians — including Maggie’s enemy and new neighbor Negan (Jeffrey Dean Morgan) — will fight the dead and fear the living in the final 24 episodes of The Walking Dead. “Not totally . There’s some sunshine between the gloom, but the dark stuff gets very, very, very, very dark,” Gimple told TWDUniverse on Twitch about Season 11. “But it’s not unrelentingly dark.

There’s some bright spots.” Producers have already forewarned the Reapers’ return after a camouflaged attacker nearly killed Daryl and Maggie, who is “marked” by a mystery person known as “Pope.” Then there’s the darker turn of Father Gabriel (Seth Gilliam) — who shocked Aaron (Ross Marquand) when he killed Mays (guest star Robert Patrick) in cold blood — and a question about whether the survivors will be forced to abandon their home that has grown with new additions like Maggie and her eight-year-old son Hershel Rhee (Kien Michael Spiller). “Without getting too into it, there’s a level of intensity to these episodes that’s both an intensity of threat intermingled with the intensity of emotions behind that, and various histories of the characters getting intermingled with that,” Gimple said. “There’s some really brutal stuff in it, and yet it directly affects some of our most beloved characters and ties into their histories in ways that we’ll see.”

After the departure of the Dutch striker Jurgen Lokadia from the Persepolis team, the directors of this club thought of … END_OF_DOCUMENT_TOKEN_TO_BE_REPLACED

On this special cover, apart from Golshifteh Farahani and Zaramira Brahimi, ten other famous faces have supported  protesting women, and … END_OF_DOCUMENT_TOKEN_TO_BE_REPLACED

Rafaela Santos is the sister of one of the most prominent and famous footballers in the world, but apart from … END_OF_DOCUMENT_TOKEN_TO_BE_REPLACED

Anashid Hosseini was born on January 24, 1992 in Ahvaz. His family moved very soon, a year after his birth. … END_OF_DOCUMENT_TOKEN_TO_BE_REPLACED

Neda Agha-Soltan (23 January 1983 – 20 June 2009) was an Iranian student of philosophy, who was participating in the … END_OF_DOCUMENT_TOKEN_TO_BE_REPLACED