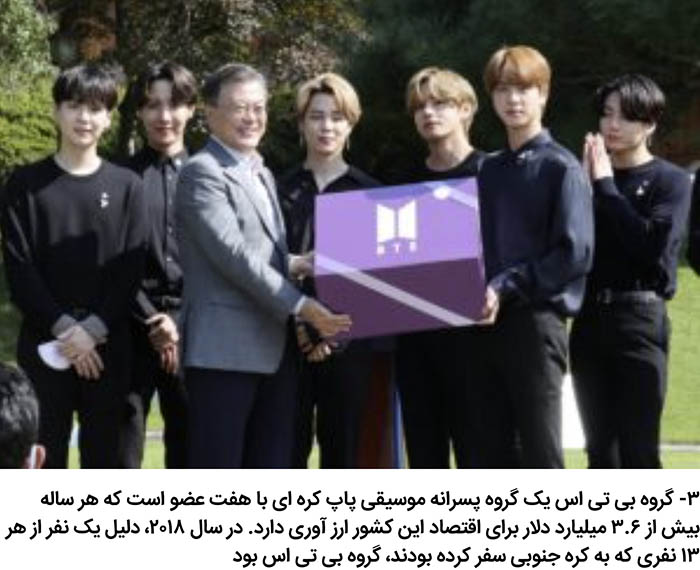 BTS, or Bangtan Boys, is a band of seven artists that was formed in 2013 in Seoul. Initially producing hip hop music, they expanded to other genres and produced many hit albums including The Most Beautiful Moment in Life, Part 2 (2015), The Most Beautiful Moment in Life: Young Forever (2016), and Wings (2016) that made it to the US Billboard 200, a first ever by a Korean group. With Love Yourself: Tear (2018), Love Yourself: Answer (2018), and Map of the Soul: Persona (2019), BTS became the only group other than The Beatles to have three albums at number one on the charts in less than a year. The band became so influential that they were asked to address the United Nations at the 73rd General Assembly and perform at the Korea-France Friendship Concert in Paris to 400 officials. They are also the youngest ever to receive the Order of Cultural Merit by the South Korean president for their contributions in spreading Korean culture and language. Between 2016 and 2018, the exponential rise in online purchases of K-pop is largely attributed to BTS.

Shiva Balochi, the actress in the series Nurses, wrote: As the smallest member of the Muslim community, the hijab has … END_OF_DOCUMENT_TOKEN_TO_BE_REPLACED

Shohreh Mousavi, one of the directors of the Badran Company, who defrauded over 9,000 billion tomans from 300,000 people by … END_OF_DOCUMENT_TOKEN_TO_BE_REPLACED

“Evil and passion work with him.” Open the heart valves. “Its night song can be heard all over the world.” … END_OF_DOCUMENT_TOKEN_TO_BE_REPLACED

The old actress Shaheen has died.Mahintaj Moghul Kayser, known as Shaheen, a cinematic actor and an old singer, has passed … END_OF_DOCUMENT_TOKEN_TO_BE_REPLACED