Amir Tataloo: “I have a mental problem, and I will hand myself over to the police.” 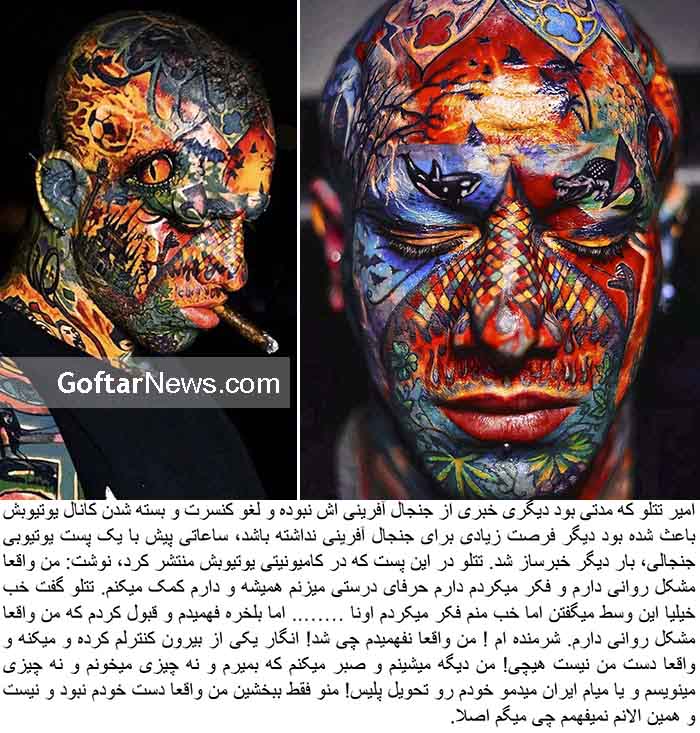 Amir Hossein Maghsoudloo known professionally as Amir Tataloo, is a singer-songwriter and rapper. Tataloo is the first R&B singer and also he is part of the first generation of the underground hip hop scene. His debut album, Zire Hamkaf, was released in 2011. Since then, he has released 16 albums. Tataloo was arrested several times when living by the Republic authorities. Amir Tetlo, who has not been known for his controversy for some time because the cancellation of his concert and the closing of his YouTube channel made him no longer have much time to create controversy, made news again a few hours ago with a controversial YouTube post. Tetlo wrote in this post that he published in his YouTube community: I really have a mental problem, and I thought I was saying the right thing all the time and helping. Tetlo said, “Well, a lot of people were saying this, but I thought that they were…” But finally, I understood and accepted that I really have a mental problem. I am ashamed! I really did not understand what happened! It’s like someone from outside is controlling me, and it’s really not in my hands! I will sit and wait to die and neither read nor write anything, or I will come to Iran and hand myself over to the police! Just forgive me; it wasn’t really my hand, and it isn’t, and even now I don’t understand what I’m saying at all. Amir Hossein Maqsoodlou, known as Amir Tetlo, had previously made several claims about saying goodbye to singing, returning to Iran, and even committing suicide on stage on his birthday, but none of them happened. He posted a poll for the day of his death and asked his fans to comment on whether to choose his birthday, 30 Shahrivar, as the day of his death, or 29 Mehr, the day of exportation!

After the departure of the Dutch striker Jurgen Lokadia from the Persepolis team, the directors of this club thought of … END_OF_DOCUMENT_TOKEN_TO_BE_REPLACED

On this special cover, apart from Golshifteh Farahani and Zaramira Brahimi, ten other famous faces have supported  protesting women, and … END_OF_DOCUMENT_TOKEN_TO_BE_REPLACED

Rafaela Santos is the sister of one of the most prominent and famous footballers in the world, but apart from … END_OF_DOCUMENT_TOKEN_TO_BE_REPLACED

Anashid Hosseini was born on January 24, 1992 in Ahvaz. His family moved very soon, a year after his birth. … END_OF_DOCUMENT_TOKEN_TO_BE_REPLACED

Neda Agha-Soltan (23 January 1983 – 20 June 2009) was an Iranian student of philosophy, who was participating in the … END_OF_DOCUMENT_TOKEN_TO_BE_REPLACED